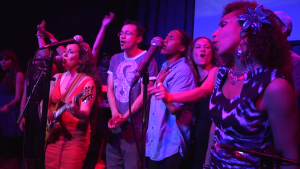 If you missed the epic Aventurera release show you can now check out these highlights! 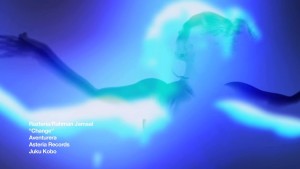 I am so excited to present *Change* Music Video a Juku Kobo Production, a trilingual world/hip hop crossover single in collaboration with Rahman Jamaal. Shot in the East Bay and San Francisco in November 2015, it was an honor and privilege to have had the opportunity to work on the set with director Keiko Okisada and DP Hitoshi Inoue and the amazing crew, Carolyn Smith, Deonta Arnold, Alex Zajicek, and Kaeli Antrim. I hope that you enjoy!

Verse 2 (English)
Life is the range, between joy and pain
It’s gonna take a toll, prepare yourself for “change”
Why would you train your brain to remain the same
When it has so much to gain, running the game Like Fila,instead you getting played by the dealer
Just know the older you get the more it gets realer
It’s right intention, the heightened sense of a healer
Or chrome to your dome that hits harder than a Steeler
You can choose either, without even knowing it
Thinking like a slave, or not thinking just going with
The trends, putting the ends above your friends
Til you gotta bunch of fake ones riding in your Benz
Time to change, money over everythang is lame
Don’t believe me just watch I won’t have to explain
Why fame ain’t all that when you change to entertain
But can’t exchange knowledge to arrange mental planes

Aventurera album is groundbreaking in its richness, representing the synergy of collaborations with talented independent San Francisco Bay area artists and beyond. *10 tracks (+ 2 bonus tracks), in English, Spanish and French. 90% recorded & produced at RAZTERIA’s own, Truffula Oak Studio, mixed by James Ward, of Live Oak Studio in Berkeley, and mastered by Justin Weiss of Trakworx. Two of the tunes (Change, Little Sister) were mixed at Kinyama Sounds, a Suisse based label. Aventurera is currently charting on CMJ new world music chart.

Advance tickets to the show at $20 includes a copy of the Aventurera album!

About AVENTURERA Album
Aventurera album is groundbreaking in its richness, representing the synergy of collaborations with talented independent San Francisco Bay area artists and beyond. *10 tracks (+ 2 bonus tracks), in English, Spanish and French. 90% recorded & produced at RAZTERIA’s own, Truffula Oak Studio, mixed by James Ward, of Live Oak Studio in Berkeley, and mastered by Justin Weiss of Trakworx. Two of the tunes (Change, Little Sister) were mixed at Kinyama Sounds, a Suisse based label. Aventurera is currently charting on CMJ new world music chart.

More About the artists on the line-up:

Razteria (aka Renee Asteria) + Fyah Squad Band
San Francisco, CA, based artist Razteria (aka Renee Asteria) can be described as a fusion of No Doubt, Bomba Estereo, Los Aterciopelados, Steel Pulse and Marisa Monte. Her multicultural background (born in the USA of Bolivian-Dutch heritage and raised in France) has had a profound influence on her musical journey. Performing in English, Spanish, French and Portuguese, her music has been described as ‘musically adventurous’ and ‘one of a kind, breaking all rules,’ uniting Reggae, passionate Latin grooves, Rock, powerful messages and some real musical genius.

Razteria is known for her simple yet intricate songs, her signature ethereal harmonies and fat bass-lines. Over the past ten years, Razteria, performing under both Razteria and Renee Asteria, has planted musical seeds throughout the Americas (Argentina, Bolivia, Canada, and USA) and Europe (France, Switzerland). In late 2015 Razteria completed her fifth album Aventurera, which will be available as of March 18, 2016 on digital platforms worldwide and in select stores. Aventurera is currently charting on CMJ New World Music.

Fyah Squad Band
Fyah Squad Band is a Reggae, Funk, & Soul band based in the San Francisco Bay Area. They work with local artists and are one of the top as a backing bands for touring artists in the area. Founding members Waddell Bell (bassie) and Lou Neuburger (drums) are jazz trained musicians who have specialized in Reggae. Artists we currently work with: Rocker T ~ JuniorToots ~ Empress Meditations ~ Razteria ~ Messenjah Selah ~ Irae Divine ~ Sol Atash and more. Touring Artists we have backed: Wayne Wonder and more.
https://www.facebook.com/FyahSquadBand

Pasto Seco Band
Pasto Seco Band is a Latin American dance band pulling from traditional central, south american and caribbean styles like Cumbia, Mambo, Saya and Salsa to bring people together in celebration. They play wild abandon, lots of horns, drums and percussion, plus accordion, guitar and bass. Based in the San Francisco East Bay, they have an all-star 14 member band, who hail from Chile, Colombia, US, Mexico, Cuba and Argentina. Through various community partnerships they work with youth helping to expose them to the richness of Latin American culture.

Jackeline Rago
A multi-instrumentalist, composer, arranger, producer and educator who specializes in Venezuelan Folk-Music as well as music from other countries of Latin America and the Caribbean.

Born in Caracas, Venezuela, Jackeline began playing music at the age of four. Prior to moving to the United States, she spent years studying the Folk-Venezuelan “Cuatro” (…) In addition to her Cuatro and mandolin expertise, Rago is an accomplished percussionist and vocalist.

Jackeline Rago is the artistic and musical director of the “Venezuelan Music Project” (Venezuelan Folk music, www.venezuelanmusicproject.com) and a founding member of the”VNote Ensemble” (formerly The Snake Trio, www.vnotensemble.com), bands which she travels and performs with in an ongoing basis. She was also a founding member of “Altazor” (Nueva Canción ensemble),” Wild Mango” (world beat music), “Keith Terry & Crosspulse” (world percussion) and “Trio Altamira”.
http://vnoteensemble.com/about-us/

Along with her partner DJ Yari, DJ Leydis created the first all female DJ Mixtape in Cuba, contributing a special blend of new flavor and spirit to the international community. In addition, she performed across Cuba as the official Spoken Word Artist of Rande Acosta’s Platos Rosa.

DJ Leydis has also been a featured subject of critically acclaimed and groundbreaking documentaries such as Inventos: Hip Hop Cubano, Jovenes Rebeldes y Mi Revolution, and continues to be an keynote speaker on the subject of Cuban Hip-Hop Culture.

In 2006, DJ Leydis migrated to United States to expand upon her work as a DJ. Based in the San Francisco Bay Area, she has worked with Erykah Badu, Quest Love of the Roots, and other iconic American artists. Presently working on tour with Los Rakas & Las Krudas, DJ Leydis combines contemporary hits with an distinct fusion of Latin flavors, R&B classics and Roots Reggae blends.
www.losrokas.com www.laskrudas.com

Rahman Jamaal + Risk, Street Poetry Music
Rahman Jamaal is a performing artist, emcee, musician, actor, and educator who first debuted in the 2003 Sundance Film Festival as the star of the movie “The Beat”. Rahman Jamaal performs for Rondavoux Records, the San Jose-based rap group Projekt S.E.E.R., and the Redwood City-based funk/rock tribute band Blood Sugar Sex Machine. He works with musicians and youth in the Bay Area as founder of the Rap Force Academy, and nationally as the Executive Director of Hip Hop Congress. He also works with organization such as with The Riekes Center for Human Enhancement, The Bring It Back Tour, The Hip Hop Chess Federation, Performing Arts Workshop, StoryTeller Project, and All-Star Karate Center. In 2014, he won the Lennon Award for Hip Hop in the International John Lennon Songwriting Contest (JLSC).

Risk, a native of São Paulo, Brazil born seven years after the end of the Brazilian military dictatorship in 1985, became a Portuguese-English translator before he moved to the United States in 2009 on a scholarship to play basketball. He recorded his first studio track “Hidden Words” at the Riekes Center for Human Enhancement after meeting Rahman Jamaal in 2013. Risk & Rahman Jamaal released Street Poetry Music Vol 1. in 2015 produced by the New York composer-producer, Bosch.

Kata of LoCura
Direct from San Francisco’s fertile music scene, LoCura taps into the diverse sounds that have a rich history in the Bay Area, weaving them together in an uncanny way to reveal their common roots. Mixing Flamenco with Reggae and Cumbia with Ska through contagious rhythms and multiple languages, their music takes you on a ride through a day in the emerging globalized experience where the movement of people and ideas are in constant flux. Reflecting lead vocalist Kata’s own experience of growing up Spanish American in Spain, Italy, and the U.S., LoCura’s music rides the borders of identity and migration piecing together a mosaic of our myriad cultures and experiences. In Spain the expression “Ida y Vuelta” is used to describe certain styles within Flamenco that made a “round-trip” from Spain to Latin America, mixing with music from the African slave and Indigenous populations. With this idea of music traveling and music as creative resistance, LoCura takes the trip back again mixing it up with their own Califas Flamenkito, Reggae, and Cuban Son styles. Moved by the music that crosses borders and takes root in different lands, LoCura draws from this creative ‘rebelde’ spirit to cultivate the cures passed on from our ancestors.

Seneca of Earthamplified
Raised in Florida, lyricist, singer producer and Dancehall artist Seneca Schachter has made the Bay Area home since 2003 And has been rocking stages since 2000. He has always combined activism and Hip Hop culture to uplift and entertain! He has also established himself as a prolific producer, working with such artists as Myka 9, Dead prez And Bicasso. He is a long time member of the Jazz Mafia and Earth Amplified, touring the Jazz festival circuit and performing over 500 times. He also is a Member of Hip Hop for Change and ROTC hosting every few months at ROTC’s weekly cypher at the Boom Boom Room. He has shared stages with Stevie wonder, Mos Def , Chali Tuna , Will.i.am, Lyrics Born and many more!! Look out for his next project “The Wheel” an ode to real And raw Hip Hop of the 90’s Simple Beats and rhymes. Earthamplified.com

Chatterbox
Sirraum Nash aka Chatterbox was born and raised in the South Bay Peninsula of the San Francisco Bay Area in CA. He developed a knack for writing & composition at a very young age beginning to write words in rhyme and poetry at age 7. At age 13, he began to hone his lyrical improvisation skills. In the early 2000’s he became a founding member of Jazz Funk Hiphop band, Precise Device. Since 2009 he has been an integral member of the Big Tadoo Puppet Crew & The PuppetPlex, based out of Berkeley, CA. He currently uses beat boxing, singing, character voice acting and Emcee skills for environmental activism, food and social justice issues, for adult and children’s entertainment.
www.facebook.com/chatterboxed
https://soundcloud.com/chatterboxed www.facebook.com/puppetplex 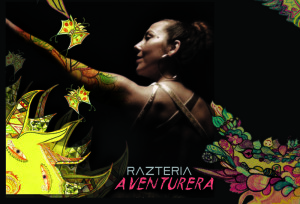 This album is so rich as it represents the synergy of many beautiful talented musicians!