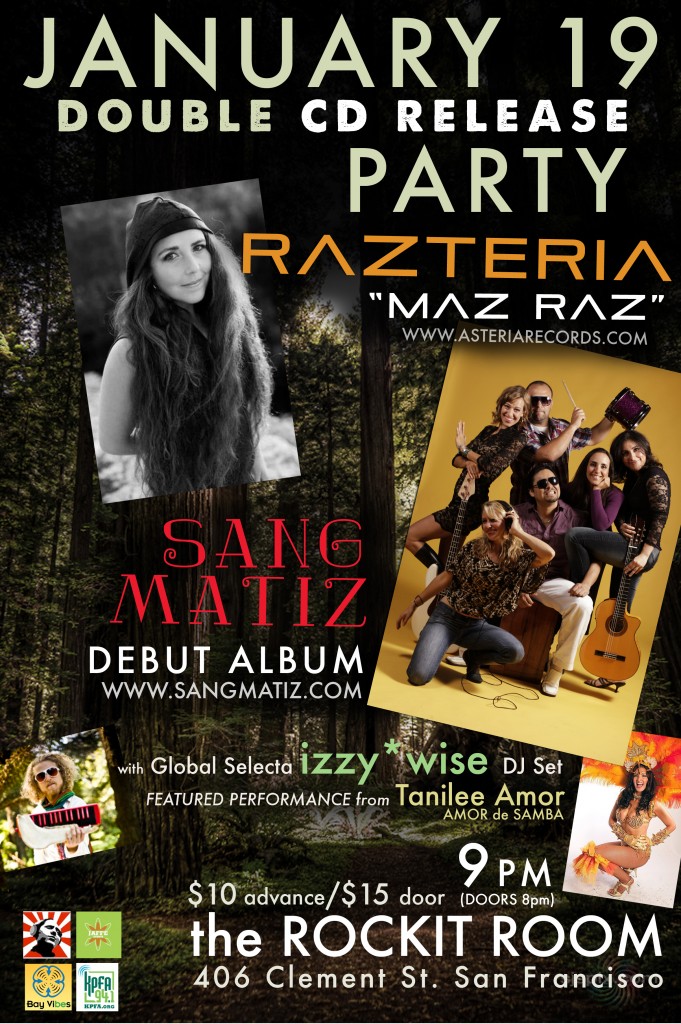 “Sang Matiz” is a collective group of musicians that started in early 2008. The name is a combination of two words: Sang, meaning blood in French and Matiz, meaning “Harmonious Mixture” in Spanish. The band adopted this name because of the diverse cultural and musical backgrounds of its members. The Band has fearlessly fused traditional sounds of Peru with Flamenco, Afro-Brazilian rhythms like Samba-Funk and Samba-Reggae along with modern touches of R&B/Hip Hop. Sang Matiz will be releasing their debut album.

Razteria can be described as a fusion of Steel Pulse, early No Doubt and Sade. Her music unites Reggae, passionate Latin grooves and Rock, powerful messages and musical genius. Described as ‘musically adventurous’ and ‘a one of a kind breaking of all rules’ (C. Foster, Reggae Update, getthebeat.com), Razteria’s songwriting reflects her passion and strong commitment to justice. Razteria will be releasing her senior album – Maz Raz.

San Francisco based izzy*wise aka Isaac Weiser first started performing music in his Dad’s Klezmer band as a teenager. As the multi instrumentalist began learning new instruments and collecting records, so came the influx of different styles and cultures of music. Having played in many bands performing reggae, afrobeat, funk, rock, hip hop, klezmer, drum n bass, and latin styles this versatile performer began producing his own music and djing in 2007. Combining his knowledge of multiple instruments, sound reinforcement, and his love of mixing music from different cultures, we now have the electro world dub mashup that is izzy*wise’s music.

Tanilee Amor is founder and artistic director of Amor Do Samba, a dance company established in 2011 and performing in the San Francisco Bay Area.

Tanilee studied dance at UCLA with a specialization in Afro – Latin dance and art as a social change agent. She has studied Afro-Latin dance in Brazil, Peru, Colombia, Mexico and Belize. After performing with San Francisco companies and training under Maisa Duke of Energia Do Samba and Lalo Izquierdo of Peru Negro, Tanilee started Amor Do Samba. Tanilee holds a Masters in Public Administration and International Management.
Amor Do Samba is a dance company dedicated to promoting Brazilian Samba and Afro-Latin music and dance. Amor Do Samba’s mission is to spread the love of life through dance and music with every show!